Inspired by the bold colors of Mike Dutton and Bill Cone, I decided a little exercise was in order. 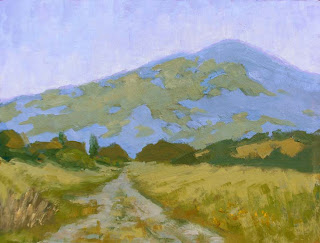 There are a number of things that have been bothering me about my paintings lately, and I wanted to address them with this sketch. I've noticed on several paintings, that my colors are looking muddy and also my brush work seems to be lacking finesse, and lastly, back to color, I feel I've been approaching color too literally. So with this sketch, done quickly during lunch, I tried to really concentrate on these issues (with the exception of brushwork, which I chose to make a non-issue altogether by focusing on color as very basic SHAPES). For starters, I did this painting on cheap ass card board, which due to it's unfinished surface, really sucks the moisture/medium out of your paints. This forced me to do a couple of key things when mixing and applying color. You can't be lazy (which I've found myself getting lately) or stingy with your paint. You have to really mix a big pile of color, and lay it on thick or else you can' get any color down at all. Doing this, makes you more aware of the color you're mixing, not just idly adding dabs here and there, you have to be decisive, which can lead to boldness! So active thought in color mixing and application was one thing I tried to work on. I continually had to fight the urge to dabble, instead mixing a pile of color for EACH color note. Color choice was the other thing I tried to play with, I like the expressive use of color used by the Impressionists as well as the Tonalists, and I'm trying to keep in mind how they implemented color by pushing and exaggerating (even substituting) various colors for effect and mood. The painting above is godawful, but I really feel like it was a valuable lesson for me in concentration and being truly conscious. Which of course brings up all other kinds of debates about intuition and going with the flow or being in the zone. I've never claimed to have any answers.

This next painting, done the same day, basically chucks away everything I tried in the previous painting : ) It was the end of the day, and I was getting shut down again trying to find a nice spot to paint in Marin (how can you NOT find something in China Camp? Sheesh!) When Mike texted me that he wanted to paint in Berkeley. How could I resist? I was saved! Well it was blowing a gale out at the Albany bulb, so we decided on an old stand by, the cement plant on 2nd and Cedar. The light was perfect when we rolled up, which of course meant that it would be gone in about 15-20 minutes, which it was. We finally had to call it quits when the industrial sodium street lights kicked on. But, the lights also came on at the cement factory, and that will make a really cool nocturne! Another time... 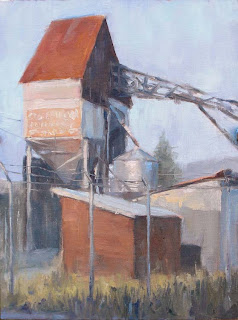 Got up early on Tuesday to hit the hills with a new flock of Early Birds, and a few returning ones. It was a gorgeous day and I really enjoyed being surrounded by some truly great artists, I hope they post their pics over at the Early Bird Site. 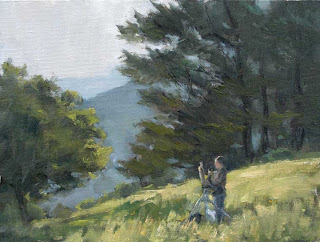 I love seeing Bill and Mike's pieces over at the Early Bird site, their expressive use of color is nothing short of inspirational. And speaking of inspirational, Bill has a show up over at the Studio Gallery of some absolutely stunning pastel paintings of the Sierra that he's been hoarding for the last few years. See it NOW! What are you waiting for? You can see a few on his blog too.
Posted by JimmyG at 11:57 AM No comments:

Away from the hills

Haven't been having much luck painting "nature" lately, so here's a truck. 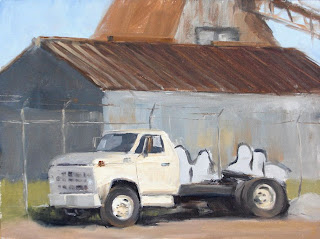 
And some lunch-time sketches from the front seat of my car.

You know what they say about idle hands and all... Well my motivation for slinging paint has been pretty low, so rather than slip into black holes of despair, I thought I'd continue my quest for going ultra light with my gear. I picked up this Julian Thumb Box from Utrecht a while ago as it was on sale and looked even more compact than my Openbox M. My thinking is that if I make it easier to bring my paints around, I 'd be more likely to use them. Plus, I've been finding that I've been doing a heck of a lot of 6x8's with a limited palette, so I don't really need to carry around as much stuff. Anyway, the box seems to be a good size, but I needed to make some mods to be truly useful. First, I fabricated a new brass hinge lock mechanism as the old one was entirely too flimsy AND it wouldn't allow the box lid to open beyond 90 degrees. I broke out the power drill, the Dremel, and some brass stock and shamefully copied the mechanism from the Open box M. It's not pretty, but it really does work well. Next I added a tripod mounting bracket to the underside as I couldn't really see using the thumb hole. I may still add a beefier hinge to the back to supplement the two flimsy ones inside, and I'll also create a vertical panel holder adapter. Currently, the lid can only hold horizontal format 6x8s. 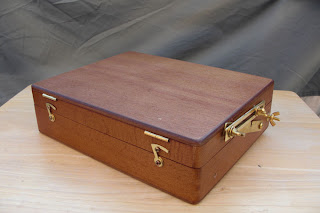 The Julian Thumb Box with new hardware (the junk on the right side of the box). 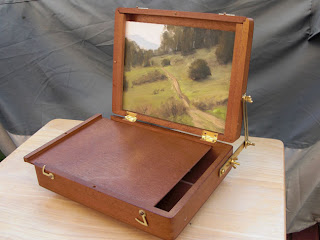 That palette is way too clean... 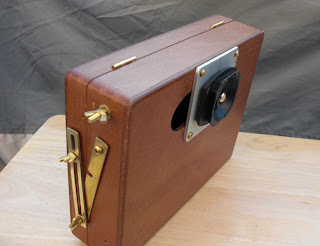 I'm trying to work through a painting slump, and trying different approaches. Here's another limited palette painting, just white, ultramarine blue yellow ocher, and maybe a touch of burnt sienna, I can't be sure. The idea for me was to concentrate on values. Painted on the cheapest piece of throw away cardboard I could find (packaging from an Ikea shelf, I've got a nice stash to play with now!). 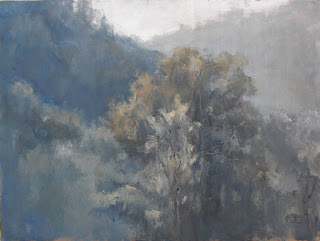 Berkeley Hills, just off of Claremont. 6x8 Oil on cardboard.

Here's another that started out with the limited palette, and then at the end, I added a little light green to the hillsides. I was surprised how close I could get to the vibrant green value with just blue and ocher. The added green helped to give a little pop to the foreground. Both of these were done on pretty hazy days, I'm curious if this palette will work in different lighting conditions. I'll be trying different color combinations, so we'll see what shakes out. 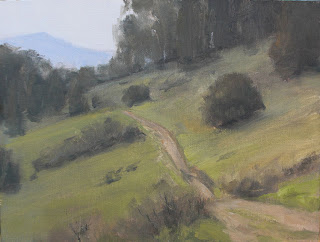 TildenPark along the Skyline trail. 6x8 O/P
Posted by JimmyG at 8:58 PM 2 comments: