Here's one from back in March when I went with my buddy Mike up to Tilden and painted at the Equestrian Camp behind Lake Anza. Got to meet little new baby Elliot too! 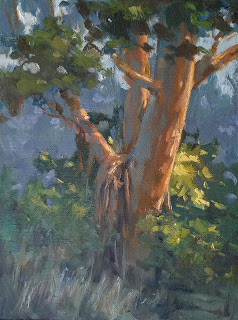 Next is from a great day out with another painting buddy Richard. We headed out to Fairfax up in Marin to check out Tim Horn's 'Open Studio' and shmooze with a genuinely nice guy and amazing artist. By the way, I'm now the proud owner of an original Tim Horn, a gorgeous little jewel of a painting that he did of an old Cadillac he saw in L.A. I really like Tim's simplification of forms and his strong sense of design, there's lots to be inspired by in his work for sure. So suitably inspired, we left the Horn home studio/garage, and headed West down Sir Francis Drake Blvd. then up Nicasio Valley Rd to the most perfect little farming village in West Marin. We found this ridiculously picturesque scene and set up. A word of warning, if you're painting here and near the road, be sure to go during the week. The noise of day tripping Harleys passing by every other minute, could very easily ruin the bucolic peaceful painting experience of the unsuspecting artist ; ) 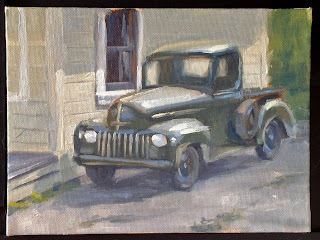 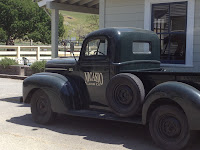 Too cool to pass up, but looked nearly black and white when viewed from up front. A nice back lit scene though.
Posted by JimmyG at 9:46 PM 2 comments: