Finally took some pics of the oil sketches I did up in Denali, and the reasons they look muddy are 1) my crappy photography, 2) my muddy painting, and 3) it really looked like that due to mostly overcast conditions. Despite the overcast, there were times when the heavens opened up and the most amazing fall colors just exploded in front of you. Painting up there was definitely challenging, and I'm not just making excuses for these paintings, I actually enjoyed the different challenges. That's what makes you better, right? Well the weather was obviously the primary one, as I said, it was mostly heavy overcast and a few days of rain too. When we found a scene we liked, with dramatic lighting contrasts, it was more than likely to change in a heart beat. Those clouds move fast. Wind was another factor, it's what drove those fast moving clouds and was at times a little too stiff to set up an easel and canvas that are only too efficient at mimicking a sail or a kite in flight. Wind and weather of course are not exclusive to Alaska, but they can be just a little more extreme up there. What was a little more frustrating was limited access to roam. It sounds funny, because Denali N.P. is probably the most easily accessible of all wilderness areas in all the U.S. Parks system, but our timing was such that we landed there in Moose rutting season, so the usual "roam anywhere you want to" policy was limited to "roadside only". And with only 15 miles of accessible road (not counting the $30 shuttle), and less than ideal weather, options quickly grew slim. I'm still learning anyway, so any bit of mileage on canvas is good for me. Quickly changing conditions, have been teaching me to quickly lay down my ideas, and I can feel that I'm getting a little better lately. On this trip, I had one composition laid in (in line work) that had to be abandoned due to weather, one total scrape down because it was too ugly, but the rest were done or at least close enough to finished that when the weather turned for the worse, I was able finish the few remaining bits later. It's the mantra for the teachers I've had and have read, to lay in your broad values early. So when I do that, and the scene changes in front of me, and I'm able to finish a sketch because I've got the structure down, it's a real "aaaaa, so that's why" moment. Unfortunately though, that won't help a crap composition, or poor drawing, but at least you can see early enough before you invest too much time and paint so you can still scrape it down!
As Pablo mentioned in the comments for the last post, there's a great PBS series on Plein Aire painting featuring Matt Smith, Kenn Backhaus, and Jean LeGassick as they paint in Denali and other spots in Alaska. This series was the direct inspiration for this trip, as I think Frank had heard of their trip before the show came out, and also heard stories from Ralph Oberg who apparently has made several trips to Denali. This series is a must see, not only for following these remarkable artists and hearing their musings on painting, but also to hear of the history of painting in Alaska. I had never heard of the great Sydney Laurence, or Belmore and George Brown, and the series shows some of their amazing inspirational work. These guys mastered plein aire in ALASKA! On GLACIERS! Man, I feel so wimpy : ) Who could turn down this call of the wild? 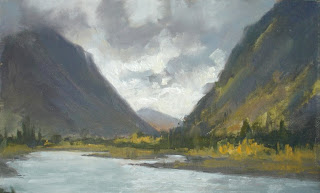 Along the Nenana river, just outside the Park. 4.5x8 O/P
Our first day in Alaska, and we were amazed that the rain held off just long enough. I had been checking the weather forecasts before leaving Ca. and all I saw was rain, rain, and more rain. The truth was though, that it was more like typical Colorado weather, where the weather moved in fast but could also leave just as quickly. 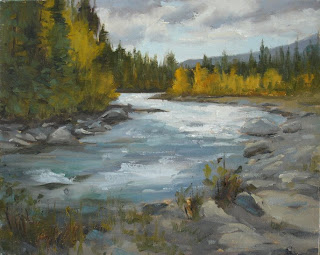 I think this was Riley Creek, which feeds into the Nenana. 8x10 O/P 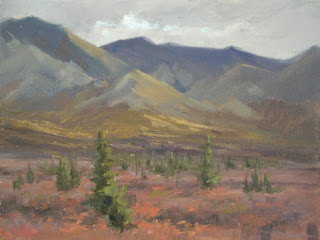 Along the park road looking south. 6x8 O/P
We were filmed by a Japanese film crew here for a story on the activities in Denali! If anyone gets Asahi TV, look for two scraggily painters in Denali! 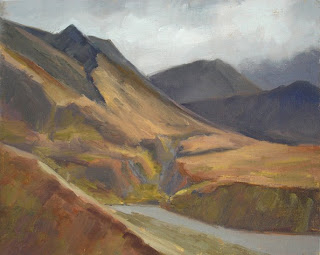 Some of the Alaska Range behind the Thorofare River (dry)near the Eilson Center. 8x10 O/P
A long bus ride (4hrs each way) to get this sketch. We were again photographed by several tourists while we painted, including full video by a very nice German guy. I guess people just got tired of taking pics of the 'other' wildlife in the park ; ) 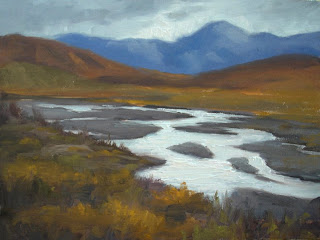 Looking south down the Savage River (great name!) 6x8 O/P
This was at the last mile on the road (mile 15) that you were allowed to drive a private vehicle on. Had most of the painting done, when a giant squall came rolling in forcing us to beat a hasty retreat to the truck!
Posted by JimmyG at 11:15 AM

sheesh that last one is really really good. Theyre all good but that one and like the first two are really exceptional- great work!

LOL! Thanks buddy, that image of Half Dome was my very first blog post. I just needed to remind myself that sometimes things can go right. My painting outings are like fishing trips, usually more casting than catching ; ) BTW, I love the soccer image series!

Jimmy ! ! !
Muddy or not, these are fabulous! Paint on bruthah! I look forward to more and more of your works!

I wanted to give you a great big thank you for taking the time to trek out to the wilds of Antioch for my show! It was really nice to meet you and I hope to run into you more often. Please email me when you have a moment so I can be on your mailing list for your future shows.